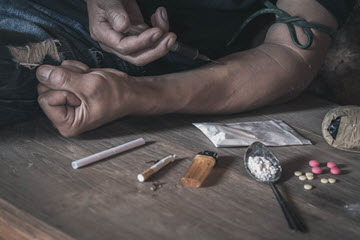 Drug possession is a serious crime. According to the Department of Justice, the majority of drug-related crimes â€“ over 80 percent â€“ are drug possession charges. Although more states are decriminalizing possession of marijuana, almost half of these arrests are for marijuana possession. Still, possession of any controlled substance, even for personal use, is illegal at the federal level. Knowing the laws and penalties for drug possession in your state will help to protect your rights.

The Legal Definition of Drug Possession

The laws state that a person arrested for drug possession must knowingly be in possession of the controlled substance and has the ability to control it. This means that the person must know that 1) s/he was carrying the drug and that 2) s/he knew the drug was illegal.

State and federal laws define drug possession as more than just the drugs themselves. The definition of drug possession also includes possession of drug paraphernalia such as bongs, crack pipes, syringes and related items. Itâ€™s also a crime to possess the chemicals used to manufacture illicit drugs.

With both simple possession and possession with intent to sell or distribute, there are two ways in which the drugs could be discovered. Possession of illegal substances is either actual possession or constructive possession.

In this situation you have actual physical possession of the illegal drug. The drugs are discovered in your hand or on your person such as in a pocket of a coat or pants

With constructive possession, the person under arrest had knowledge of, access to and control of the illegal substance. This occurs when the drugs are discovered on or around the personâ€™s property such as a house or vehicle. In such a situation, other individuals, such as all occupants of a house, can be charged with drug possession.

Is It a Misdemeanor or a Felony?

There are three main criteria used to determine if you will be charged with a misdemeanor or a felony for drug possession.

It should be obvious to you, that even a minor drug offense can have many unintended consequences. We believe you should always talk to a drug lawyer regarding these matters.Â

The type of drug not only includes illegal drugs, but also prescription drugs that are illegally obtained. Some illegal drugs are considered more dangerous than other, and possession of these drugs usually leads to harsher penalties. For example, possession of methamphetamine is usually a felony regardless of the amount, whereas possession of marijuana is often a misdemeanor.

For simple possession of a controlled substance, the charge can be either a misdemeanor or felony. For anyone arrested for drug possession with intent to sell or distribute, the charge is usually a felony.

The Controlled Substances Act became a federal law in 1970. This statute separated drugs into five classifications or schedules based on the potential for abuse or addiction, and the medical benefits. Schedule 1 drugs have a higher risk of abuse and fewer or little to no medical value compared to Schedule 5 drugs.

The amount of controlled substances found in your possession is critical in determining how you will be charged. The laws vary from state to state, but in all cases a larger amount of a drug will lead to stricter penalties. In most states, a quantity of a drug over a certain amount will result in a felony charge.

Other factors may also result in a felony charge rather than a misdemeanor despite the amount of the drug found in your possession. When a person is arrested for drug possession within a certain distance of a school or day care centers, the penalties are stiffer.

Drug possession charges result in a wide range of penalties and are based on a number of factors. These determining factors include the state you are arrested in, and the type of controlled substance. Drugs in Schedule 1 impose harsher punishments than substances in Schedule 5. Also of importance is the amount of drugs in your possession, whether there was intent to distribute or sell the drug, and your criminal history, if any.

Another factor is whether your drug possession charge is subject to state or federal laws. This means that federal authorities may choose to enforce federal laws in some situations. Federal laws usually take precedence over state laws.

Although many states (including New York) have legalized marijuana for personal use, possession of this drug is still illegal at the federal level.

The types of penalties for drug possession are as follows:

In most cases, the arrested individual faces a fine. Other possible penalties are probation and drug treatment programs.

Possession with Intent to Sell Penalties

If federal charges are imposed, a person can get 10 years in prison in addition to a fine of $100,000 or more

Federal Sentencing Guidelines and state law have minimum sentences for drug Â charges. For example, in New York, if you are charged with possession of heroin, cocaine, meth or other hard drugs, you face one to three years in prison. The federal guideline for possession of crack often has a stiffer sentence with a minimum of five years in jail in addition to a large fine. Federal drug charges of a felony have a minimum prison sentence of 10 years if the person has a criminal history.

More Information About Drug Possession With The Intent to SellÂ

Another defense is police misconduct in the form of entrapment. If drugs are not in plain sight, then a defense of unlawful search and seizure of your home or vehicle is possible, if the police didnâ€™t have a properly executed search warrant or you didnâ€™t give permission for the search.

You have a defense if the arresting officer failed to read you your Miranda Rights. When the seized drugs are tested by a lab which confirms the drugs arenâ€™t as claimed, this is a defense. A defense of mental disease or defect is also an option.

A defense for possession with intent to sell or distribute is maintaining that the drugs were not for sale but only for personal use.

In some states, there are drug courts. These specialized courts deal with drug-related offenses. The main focus is drug rehabilitation rather than incarceration. Defendants are required to participate in a year-long drug treatment program and agree to random drug testing. New York has the most drug courts in the United States.

Drug possession is a complicated matter. You need an experienced criminal defense attorney on your side to help you through the confusing time after an arrest. With state and federal drugs laws changing, you need someone to advocate on your behalf. Find a drug crimes lawyer in your area today.