Cocaine and Crack Cocaine: What to Know 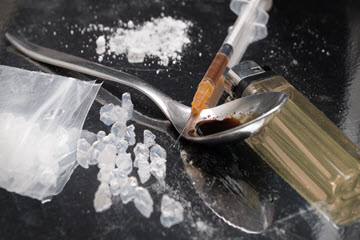 Although cocaine has been in use for over 100 years, its popularity didnâ€™t peak until the 1980s and 1990s. This isnâ€™t surprising because cocaine is a powerful stimulant that affects the brain. The two forms of the drugâ€“cocaine and crack cocaineâ€“are both highly addictive.

The Similarities and Differences between Cocaine and Crack Cocaine

Cocaine is a white powder, a hydrochloride salt. The drug is usually snorted, but some users inject it. The powdered form dissolves in water so it can be used intravenously.

Crack is a rock form that comes in white, tan, or cream colors. Crack is derived from powdered cocaine. Water and baking soda are added to the powdered cocaine and the mixture is boiled. It cools into a hardened substance that is then broken into small pieces and sold as crack. Users smoke crack.

Why Cocaine and Crack are Addictive

The high that users get with cocaine or crack is what makes the drugs addictive. Cocaine and crack produce different effects on the body and brain. The duration and intensity of the high is determined by whether the user snorts, injects or smokes the drug.

In general, crack provides a more intense high than cocaine. Â Some of the effects of using cocaine or crack include:

The effects of cocaine and crack use vary based on a number of factors. The purity of the cocaine is one factor. Drug dealers may add other ingredients known as cutting agents. Some dealers dilute the drugs by adding talc, cornstarch, sugar, and/or glucose. Other dealers add drugs such as procaine, or stimulants such as Ritalin, amphetamines, or ephedrine. These drugs enhance the effects of the cocaine or crack.

Smoking crack results in a faster and more intense high than cocaine. The effects of smoking crack occur almost instantly and the high lasts longer due to crack being highly concentrated. By smoking crack, the lungs absorb the drug and it enters the bloodstream and the brain in about 10 to 15 seconds.

Risks of Cocaine and Crack Use

One of the main risks of using cocaine or crack is becoming addicted. Long-term addiction can lead to mood imbalances and restlessness. More serious problems are paranoia and auditory hallucinations.

The main risk is an overdose. An overdose is more likely with smoking crack due to its fast effects. The symptoms of a crack overdose are rapid heart rate and hyperventilation. With an overdose of cocaine there may be convulsions or a coma. Death from an overdose is also possible.

Who Uses Cocaine or Crack

The prices of cocaine and crack also affect usage. The cost of 3.5 grams of cocaine is around $120 to $150 or more. The cost for 1/10 grams of crack is $10 to $25. Crack is a cheaper alternative to cocaine and is accessible to more people. There are many users who start with cocaine, but then switch to crack when a cocaine habit becomes too costly.

In 2014, the National Institutes on HealthÂ (NIH) reported that there were 1.5 million cocaine users over the age of 12. Most users are 18 to 25 and male. Almost 25% of admissions to emergency rooms were related to cocaine usage. In this same year, 3,000 males and 1,000 females died from cocaine/crack overdoses in the United States.

In New York, cocaine is making a significant comeback, according to the Drug Enforcement Administration (DEA). Some dealers are adding fentanyl, an opioid, to the cocaine. Opioid-related deaths have increased 60% from 2015 to 2017 in New York.

Based on the number of overdoses, the National Center for Health Statistics named fentanyl the deadliest drug of 2016 with cocaine a close second.

If you or someone you know has a substance abuse problem, drug treatment centers are the solution. Drug addiction takes its toll on individual lives, families, communities, and society. Â Treatment centers are available to help substance abusers end their addiction. Learn more about drug rehabilitation programs to find the one that is best for you.