Drug Trafficking and Its Many Consequences 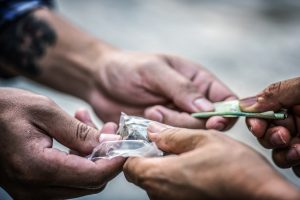 What is Drug Trafficking?

Trafficking is a more serious crime than drug possession or drug dealing. Drug trafficking or distribution is a felony at both the state and federal levels. The penalty for drug trafficking ranges from a few years in prison to a life sentence.

To prove drug trafficking, the defendant must knowingly be in possession of illegal drugs with the intent to sell, transport or import the drugs. Evidence such as digital scales or small plastic bags found with the drugs, large amounts of cash, business records of drug sales or purchases, or witness testimony from someone who sold or purchased drugs from the defendant can all help to prove a charge of drug trafficking.`

FIND A DRUG CRIME LAWYER IN YOUR AREA

Drug dealing is often defined as selling or distributing illegal substances on a small scale. For example, selling small amounts of drugs on a street corner or in a park, or buying drugs for personal use, and then selling part of it to offset the cost of the drugs. Most people in this situation are charged with possession with intent to sell or drug dealing. Depending on the quantity of drugs found, in some states this can be a misdemeanor.

Drug trafficking involves possessing unlawful drugs on a larger scale. Trafficking includes all the elements of the drug trade process from manufacturing or producing the drugs, the smuggling and transportation of drugs to different locations, and distributing drugs to the dealers.

The Complexities of Legalized Marijuana and Criminal Charges

Many states have legalized the sale and purchase of marijuana for personal use, but it is still considered a crime by the federal government. This makes the drug laws more complicated when you are arrested for drug trafficking in the sale or transportation of marijuana.

When charged with drug trafficking, the amount of marijuana found in your possession is crucial to whether you face a few years or a few decades in prison, even if marijuana is legal in your state.

Even in states with legalized marijuana dispensaries, the laws for transporting marijuana are different if you are a business entity or an individual. You can still be charged with drug dealing or trafficking if you arenâ€™t following state laws regarding licensing, taxation and other legal requirements to own a marijuana retail business.

Due to confusing laws, you could be charged at the federal level for drug trafficking if you cross state lines with a large amount marijuana legally obtained in your state. The punishment for drug trafficking depends on the quantity of marijuana transported and the criminal history, if any, of the defendant.

In general, state laws deal with drug trafficking charges of smaller quantities of controlled substances, whereas large scale drug trafficking operations usually are the domain of the federal government.

The prison sentences for drug trafficking at the state level are often less severe than similar drug crimes charged by the federal government. For example, in New York, first-time offenders found in illegal possession of Valium may face one to two years in prison, but a major drug trafficker can get 15 years in prison.

Penalties for a Drug Trafficking Conviction

The penalties for drug trafficking are usually a jail or prison sentence, fines and supervised release (probation). Many factors play a role in how a drug trafficker is sentenced. These factors include the type of drug, the quantity of drugs, and the distribution area.

There are also minimum sentences for drug trafficking convictions. The federal government and many states have mandatory minimum prison terms. For example, if you have a criminal record and are convicted of drug trafficking, you face at least 10 years in a federal prison. In New York, where there are five classes or levels of felonies, the minimums vary depending on whether you are convicted of a Class A felony (the most serious) or a Class E felony (the least serious.) In most situations, itâ€™s the quantity and type of drug that determines the felony class.

Controlled substances are classified into five schedules. Schedule 1 drugs include heroin and marijuana, and are considered the most addictive. Schedule 2 drugs include cocaine and methamphetamine. Schedule 3 drugs include ketamine and anabolic steroids. Schedules 4 and 5 are prescriptions drugs such as Lyrica, Ambien, and Xanax.

The United States Sentencing Commission stated that in 2016 methamphetamine accounted for one-third of drug trafficking offenses, followed by cocaine, marijuana and heroin.

With a huge quantity of drugs, the federal government is usually in charge of the case. The defendant can get 10 years to life in prison for the following drug amounts:

A prison term of five to 40 years is possible for the following amounts:

There is a prison term of no more than five years for 50 kilograms of marijuana.

Prison terms may be longer if certain factors, called enhancements, are involved. These enhancements make drug trafficking charges a more serious crime. These factors include being in possession of a firearm, prior conviction, selling drugs in a school zone, and selling drugs to children or to pregnant women. If a death or serious bodily harm occurs as a result of the drugs that is also an enhancement.

Another enhancement is if the defendant is considered the leader of the drug trafficking operation.

A drug crimes attorney will help defendants find the best defense for their situation. In all cases the prosecution must prove you had the intent to commit drug crimes and knowledge of what was going on. Below are some of the more common defenses for those charged with drug trafficking.

With a good defense, you may get a favorable plea deal or get an acquittal at trial. With a great defense you could get the charges dropped.

Other Consequences of a Drug Trafficking Charge

State and federal authorities may also confiscate your property and assets if you are charged with drug trafficking. This includes your cash, vehicles, home, and bank accounts, anything used in your crime or obtained as a result of your crime. The seized property remains in the possession of the police during the investigation and trial. In some situations, you may have to file a civil lawsuit for the return of your property.

Facing drug trafficking charges is a stressful and frightening experience. You need legal counsel that specializes in drug-related crimes. The best way to remain hopeful is with a top-notch criminal defense attorney working on your behalf. Find and speak with a drug crimes lawyer in your area today.