Crystal Meth Why Its So Addictive and Harmful 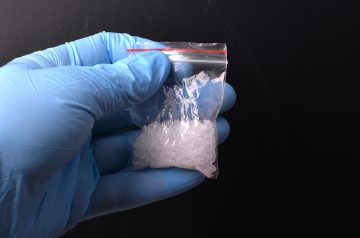 Crystal meth is a serious drug problem in some regions of the United States. Itâ€™s an illicit drug, a stimulant that takes effect immediately and lasts a long time. Itâ€™s highly addictive, but with treatment you can end substance abuse.

What is Crystal Meth?

Crystal meth is one form of methamphetamine.

Methamphetamine is a popular and illegal recreational drug. The drug is a white crystalline powder, which comes in other colors such as orange, yellow or brown. It goes by many names including meth, beanies, crank and chalk.

As a powder, itâ€™s snorted. Because the powder easily dissolves in water or alcohol, people can inject the drug with a syringe. In pill form, users take methamphetamine orally. Â

The clear or white chunky form resembling ice is known as crystal meth. Its street names are ice, glass or quartz. Crystal meth is usually heated in a glass pipe and smoked. Less common methods of using crystal meth include crushing it up and snorting it, and heating up the drug to inject it.

Why Crystal Meth is Addictive

Crystal meth is the purest form of methamphetamine, making it more potent. The drug is fast acting and double the potency of cocaine. It affects both the body and the brain, and the effects take place instantly, especially if smoked. Methamphetamine works by affecting the chemicals in the brain, such as increasing the levels of dopamine. Â Â

The duration of the highs can last from six to 12 hours. In some cases, people can be high for almost 24 hours. The intensity and long-lasting effects make the drug very addictive. These effects also make an overdose more likely.

The Effects of Crystal Meth

With crystal meth, there are many effects from taking the drug. The most common effects are as follows:

However, while some may see these as benefits of using crystal meth, there are always downsides.

The Risks of the Drug

Prolonged use of crystal meth can lead to various health problems such as memory loss, aggression and even psychotic behavior. Â Even short-tem use can lead to erratic behavior, sometimes even violent behavior. The drug may also lead to heart and/or brain damage.

Other serious health risks from using crystal meth include:

Crystal meth also can cause mental health issues. Mood swings, anxiety, and paranoia are possible. Other psychological issues are psychosis, hallucination, and suicidal thoughts. Some people have homicidal thoughts.

In addition to all these adverse effects on the body and mind, there is also the possibility of overdosing. An overdose from methamphetamine can result in heart attacks or strokes. Death from drug use is also a possible risk.

The National Institute on Drug Abuse (NIDA) reports that in 2015, six percent of the population over the age of 12 has used crystal meth. Most users are over 26 years of age, but people from all socioeconomic levels, races, ethnicities, genders and age use this powerful drug.

In New York, the Drug Enforcement Administration (DEA) reports that crystal meth wasnâ€™t a big problem in the city until 2016. Prior to that year, the main users of crystal meth were the gay community. Gay and bisexual men used the drug because it increases libido and energy. In 2014, 90% of deaths from meth were among men, aged 35 to 54.

Since 2016, crystal meth suppliers have targeted New York and its nightclubs, and the drug spread to other communities. Many people now view crystal meth as a â€œclub drug.â€

The Department of Justice (DOJ) in its 2017 National Drug Threat Assessment reported that 897,000 people (aged 12 and over) were using meth.

Crystal meth addiction is one of the hardest substance abuse problems to treat. But you or a family member has options. There are both private and public treatment centers. Some are located in hospitals, other are in resorts. There are out-patient and in-patient programs. You can find the right drug rehab facility for you particular needs.