Heroin: The Most Common Opioid Drug 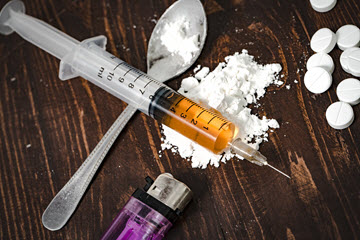 Heroin is a dangerous drug.  As the opioid epidemic continues, one of the most long-standing opioids in use is heroin. It’s highly addictive and illegal with both short- and long-term health concerns. Drug treatment programs are available for anyone who wants to get clean.

Heroin is a white or brown powder. It also comes as a black sticky substance called black tar heroin. There are a few different ways to use heroin. Usually, people inject heroin, but it is also snorted and smoked.

With ongoing use, people develop a tolerance for heroin. This means that they need larger doses of the drug or must use the drug more frequently in order to get high. Street names for heroin include horse, smack and big H.

Why Heroin is Addictive

As with most controlled substances, heroin affects the brain quickly by binding to receptors located in many areas of the brain, especially those associated with emotions, heart rate and breathing.  Although users feel a sense of pleasure when using heroin, there are negative effects as well.

The Effects of Heroin

Below are some of the short-term effects of using heroin. The side effects become worse with prolonged use of heroin.

People who abuse heroin for a long time may develop various health problems, such as the following:

For those who inject heroin, another possible complication is collapsed veins. People who snort heroin can get tissue damage in the nasal cavity.

The Risks of Heroin Use

There are many risks in using illicit drugs. For many heroin users, shared needles and other drug paraphernalia can lead to serious infections such as hepatitis and HIV.

Even those who try to end their addiction without utilizing a drug rehab program can face severe withdrawal symptoms within a few hours of abruptly stopping the drug such as:

In addition to the health problems caused by extended use of heroin, and withdrawal symptoms, there are other risks such as an overdose. These risks are more possible for intravenous heroin users. If drug dealers use additives in the heroin, such as sugar or powdered milk, there is an increased risk of these substances clogging the blood vessels and causing permanent damage to the brain, lungs, kidney and liver.

The signs of an overdose are very slow breathing or breathing stops. This leads to less oxygen getting to the brain and causing a condition called hypoxia. The side effects of hypoxia are coma and permanent brain damage. The treatment for heroin overdoses is Naloxone, a medication that quickly binds with the opioid receptions to block the effects of the heroin. Naloxone needs to be administered soon after an overdose. If not, an overdose can lead to death.

The use of heroin is on the rise and addiction affects all levels of society. In 2017, close to half a million people over the age of 12 reported using heroin in the past year. Every year people are rushed to hospitals because of drug overdoes. In 2015, over 81,000 people went to emergency departments because of heroin overdoses.

The rise in use partly stems from the opioid epidemic. People who became dependent on prescription opioids for pain relief turned to illegal opioids such as heroin when they could no longer get legal prescriptions.

Heroin is an opioid that is growing in popularity. Fortunately, there are a range of treatments available for heroin addiction. These include medications and behavior modification. But no treatment works for everyone. You or someone you love can take the first step to end heroin addiction by finding a drug rehab clinic. With commitment to getting clean, you can look forward to the future.